Stories from History Stories travel through time, space and across continents

History is all around us and the fabric of our world echoes with stories from our past. A historical topic can be enhanced by a story. It can provoke laughter, outrage and ideas. I tell a wide range of stories from history as well as fictional stories about famous people set in a particular period. The information below gives a flavour of some stories that I have told both to adults and children across a school. I have many other stories from other periods of History in my repertoire. My two books have strong historical echoes that have helped to shape my modern-day stories.

These are timeless tales that continue to be retold in different formats. I love telling these myths and often recount stories from the Iliad and the adventures of the wily and resourceful Odysseus. I have also told tales of feuding gods, fantastic creatures, and Orpheus's journey into the Underworld amongst many others.

I have always been fascinated by the story of Boudicca and how as a wronged woman she shook the Roman Empire. I dress up as Boudicca and together with my audience we actively sack Camulodunum and rampage across the land! 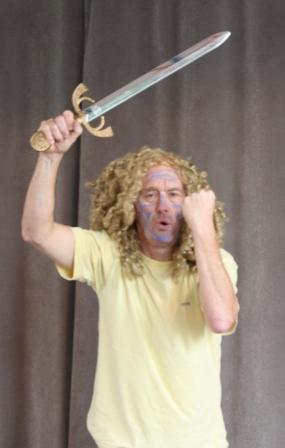 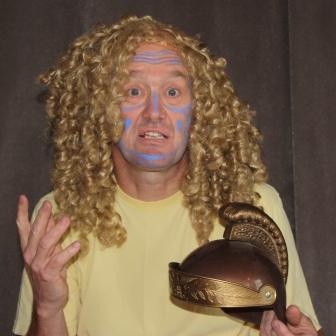 Afterwards I talk about historical sources like Tacitus and where his sympathies may have lain. I have told this story in the Caerleon amphitheatre to over 200 young people. I have also told a version to adult audiences.

I perform Caractacus (Caradoc) in role, telling of his West Country adventures and his brave entrance in front of the Emperor in Rome.

Ancient Egyptians I tell stories of the gods - a particular favourite is Sekhmet the Slayer!

Saxons The great tale of Beowulf is wonderful to tell as is King Alfred in the marshes. I have also linked the Arthurian legends to the Saxon invasion. Occasionally at Wick Court I tell a trick ghost story involving Saxons and their fate in the nearby River Severn; this is partly based on local legends but also links to a documented battle.

Norse Norse legends have many great stories including some about the gods such as Thor, Loki and Odin in Asgard and beyond.

Victorians I do a Christmas re-telling based on Leon Garfield's wonderful 'Fair's Fair.

World War 1 I tell stories like the Christmas Truce through the voices of eye-witnesses. For the WW1 anniversary I was asked to take part in a Lottery-funded project in my local village and told a story enhanced by artefacts and my grandfather's diary.

World War 2 Amongst others, I tell a story in the first person about an evacuee; this is based on a collection of true reminisces.