The Blunderbirds Stories travel through time, space and across continents

The ‘Blunderbirds’ are the pedalling poet and musician Brian Dimmock and myself; people think our name is appropriate!

We combined our talents for the fortieth anniversary of the "Farm For City Children" charity and visited 12 London schools with a performance of songs, poems and stories. We cycled round London or our bikes – this was eventful as we were carrying a guitar as well as our other props!

We also celebrated Shakespeare’s anniversary by cycling to many Gloucestershire schools. Brian sang his wonderfully crafted song encapsulating the Bard’s life; I told my own story about a moment in Shakespeare’s life and we ended with a chaotic sonnet session involving a female member of the school staff and one of the ‘Blunderbirds’ in a dress.

The ‘Blunderbirds’ are happy to perform a special event for a donation to the ‘Farms for City Children’ charity. 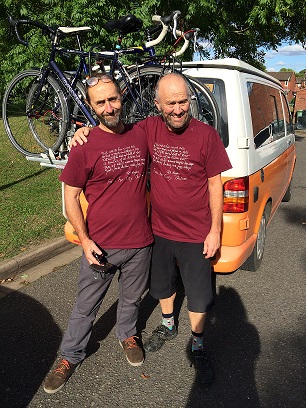